back to how does it work 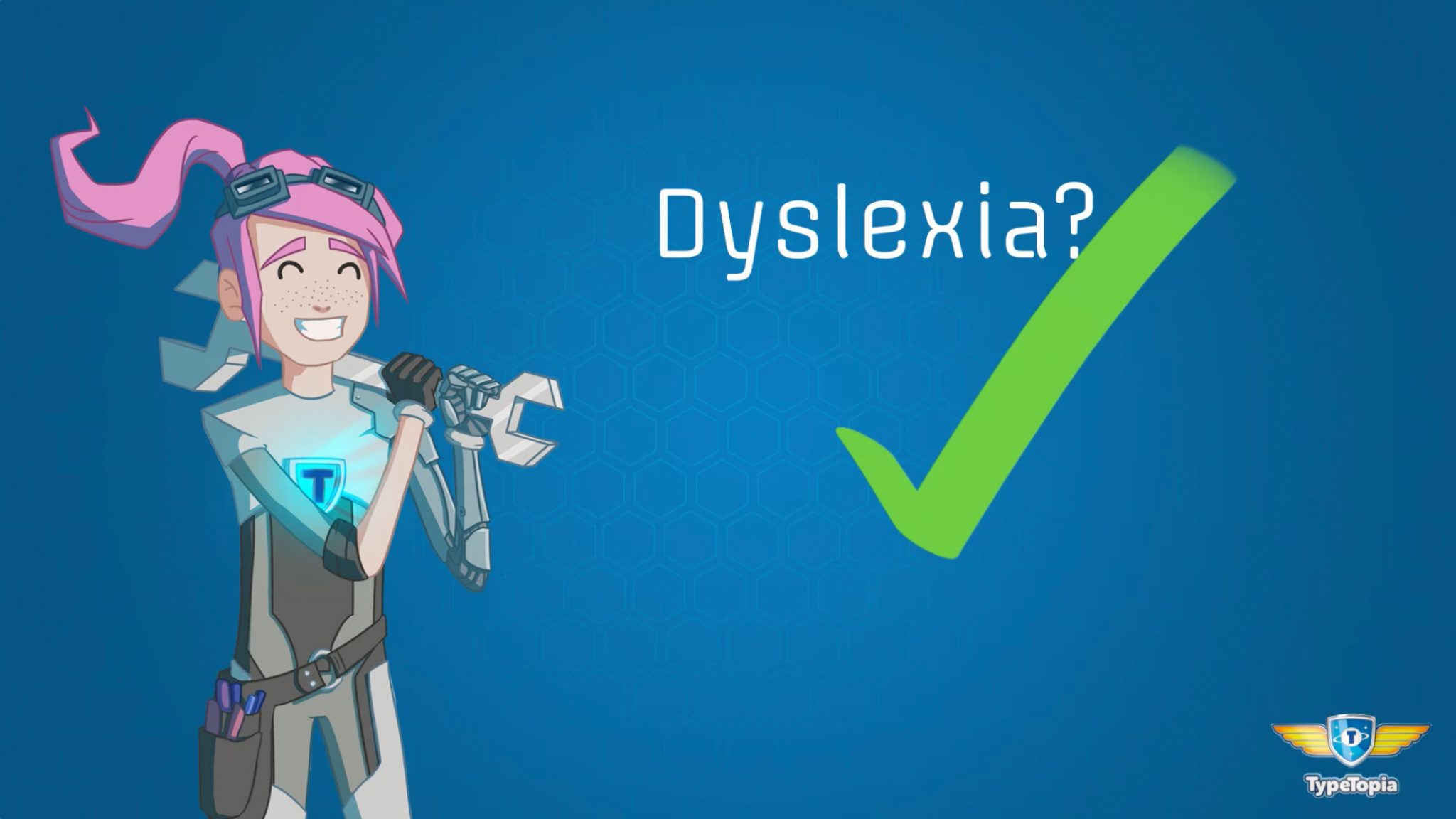 Why learn to touch type when you have dyslexia?

Especially for children with dyslexia, touch typing is a huge advantage. They can then use a laptop at home or in the classroom. With the some big advantages:

TypeTopia, finally something fun with language

Reading is more difficult if you have dyslexia. By learning to type at TypeTopia, we therefore offer extra help during practice. In the beginning of the training, where single letter sequences are typed, such as: "f f j j" we pronounce the letter one by one.

By slowly building up and extending this stimulus-response model, you re-learn the whole alphabet (including the image of the letter and spelled letter) in a challenging way.

If your child is still on a dyslexia remediation course which involves practising with syllables, it is better to wait with TypeTopia.

During the process of learning to touch type, you repeatedly come into contact with the whole alphabet. After all, you have to be able to find all letter positions without looking.
For a child with dyslexia, this has the following advantages:

The positive effects of the TypeTopia dyslexia version have been scientifically researched. The research shows a significant improvement in at least four of the seven reading skills studied.

We regularly hear from parents that their dyslexic child has made enormous progress after going through the TypeTopia dyslexia version. It's great that it has now been scientifically proven that the course works.

Thesis research shows that the reading skills of dyslexic children demonstrably and significantly improve when they follow the dyslexia version of TypeTopia. "For dyslexic children it is very difficult to learn to read and write automatically, and this touch typing course supports them exactly in the things they have difficulty with," says researcher and educational expert Evelien Dam. "Reading and writing are increasingly important in our digital world and children who have not learned it well experience a permanent disadvantage."

For her study Educational Science and Technology at the University of Twente, Evelien Dam thoroughly investigated the dyslexia version of TypeTopia. She tested 58 diagnosed dyslexic children, aged between 8 and 12, from 11 different schools. Half of the children followed 12 lessons of the touch typing course, the other half did not.

Before and after the course the children were subjected to a couple of tests:

Fifty-eight children participated in the study, none of whom had previously taken a touch typing course. The test group followed 12 of the 20 lessons of the dyslexia version of TypeTopia; the control group followed no course. Seven tests were performed; in four of these, the children in the test group scored significantly better than those in the control group. In the semantic tasks, these are naming colours and numbers, and in the phonological part, long words and nonsense words. These results are comparable with the results of TopiaTeam: children who do the complete dyslexia course show the same improvements.

A fun experience with language

With TypeTopia, the emphasis is on learning to type in the form of an adventure in space. The dyslexia version supports learning to type. Because of the gamification and the support, dyslexics can experience success. It is really something educational and motivating with language. You do not have to do homework and you are not confronted with the fact that you are dyslexic. Children have a lot of autonomy with TypeTopia, and can decide for themselves when they practice and how much. They can even set their own schedule. That gives dyslexes a feeling of independence. At TypeTopia, we offer dyslexics a place to be who they are and enjoy the adventure.

Re-introduction of the alphabet

Children with dyslexia learn more than just touch typing with TypeTopia. Because the alphabet is presented anew, letter and word recognition also improves. The letters and many of the words are repeated regularly and are supported by a natural voice through audio support.

What is different about the dyslexia version?

TypeTopia is the only typing course provider to include the Dyslexia font in its online exercises. The usefulness of this font has been scientifically proven in studies by the University of Twente and the University of Amsterdam. Dyslexic readers make fewer reading errors than when they read a text in Arial. There are also other fonts for dyslexia, but the effect of these has not been scientifically researched.

If you purchase the dyslexia version of TypeTopia, the font "Dyslexia font" can be used in the exercises. The use of this font increases the readability for people with dyslexia.

Reading exercises to you

Many exercises are read aloud by a natural voice. This intensive Bekiaudio training ensures that the sound-letter connection is better established in children with dyslexia. This concerns only the exercises. The text spoken by the characters in the surrounding story is not read aloud.

In the dyslexia version, the Reflextrainer (the tempo-controlled exercises) can be adjusted to your own pace. For someone with dyslexia, the standard tempo can be too difficult at first. The "difficult letters" must also be able to be played at the same speed in order to achieve automaticity. "Difficult letters" can be letters that have not yet been trained much or letters that are motorically more difficult to reach (z, x, c as well as y and b). Only when all the letters are mastered at the same basic speed can speed be trained.

Children with dyslexia often have more problems with certain letter combinations. In the course we pay extra attention to this.

By freezing the background, there is no more distraction and you can fully focus on the typing task at hand.

The course is concluded with the Computer Typing exam. The exam requirements for the special/dyslexia version are the same as for the regular exam, but extra help is provided during the (trial) exam.

So we do not adjust the speed downwards, but you can use the dyslexia settings that also served as support during the course.

It is important that a child with dyslexia can also achieve 120 strokes per minute. With the support of dyslexia settings, this is certainly possible. This is why we do not mention on the diploma that someone has taken the dyslexia version.

What our participants have to say

TypeTopia scores a 4.4 out of 5 stars on Trustpilot Lees een van onze 1.699 reviews

Hi I am Victor, I am 11 years old and have dyslexia. I just got my touch typing diploma!

Five months ago I started the typing course from TypeTopia. You have to practise at least 3 times a week, with a maximum of 5. When you finish an exercise, your parents get an e-mail so that they can keep an eye on how often you type and how it goes. I did the special dyslexia version of Typetopia. I didn't find it difficult and I enjoyed doing it. The fact that I have dyslexia did not bother me. I passed with an 8

Happy with this course

Our son has autism and we searched a long time for a typing course that suited him. He is doing very well with the dyslexia version of TypeTopia. And he continues to find it interesting. What I also like is that you, as parents, are kept informed of your child's progress via e-mail. Recently my son thought he had done something wrong. So I e-mailed the customer service and I got an answer the same day. That service is also great. We are happy with our choice for the typing course.

Progress throughout the course, victory at the end

Talan was very enthusiastic during the first 3 weeks. After that it became very difficult for him because he typed everything wrong (also due to his dyslexia) and became frustrated. He was very reluctant to do it, so the exercises took a long time. After a lot of talking, explaining and looking for a way to get him to go for it, he persevered. After a few weeks, it suddenly became easier and more fun. With the occasional setback, he is now very proud that he managed to do it and receive the diploma. A victory on all fronts!

The development of the font

Graphic designer Christian Boer, himself dyslexic, designed the typeface as a graduation project for the art academy. In the meantime, research at the University of Twente has scientifically proven the functioning of the typeface. From all corners of the world there is interest in his typeface and he receives invitations for international lectures. The news has received a lot of attention in the media.

Christian also went through the dyslexia version of TypeTopia himself and gave valuable tips to further improve the readability of the exercises. And this makes TypeTopia even more accessible for children with dyslexia.

When I used to go to remedial teaching, it always felt like going to the dentist. Not fun, because you are confronted with your problem every time. That is why I think TypeTopia really offers a brilliant solution for children with dyslexia. They learn this very important skill in a playful way. Finally, something fun with language for children with dyslexia. The integration of the font in the course of TypeTopia certainly helps the students with reading.

20% discount on the font

After purchasing the TypeTopia Dyslexia version, you will receive a discount code for a 20% discount on the font so that you can use it in programs such as Word, Excel, etc.

The dyslexia version is also suitable for others

Besides dyslexia specialists, remedial teachers and speech therapists are also enthusiastic about the dyslexia version. Children with motor difficulties, concentration problems, adhd and/or autism also benefit from this adapted version.

Experience for yourself how TypeTopia works.

Do the trial now
Or order at a discount right now